Home > About us  > The INS Trustees > Rob Zeldenrust

Rob Zeldenrust explains: “Having been born in Bandung, I have always felt a special connection to Indonesia, even though my family returned to the Netherlands when I was a baby.

After my law studies at the University of Leiden, I spent most of my working life in the Dutch Foreign Service, retiring as an ambassador to UNESCO in 2014. During the first half of my career I focused on development cooperation issues, working on East and West Africa and in Sri Lanka. Furthermore, I dealt with multilateral financial institutions such as the World Bank, the Asian Development Bank and the International Fund for Agricultural Development, where I served as our constituency’s Executive Director. Later, I broadened my scope, covering i.a. consular and migration issues and the Balkans as well as working as Deputy Chief of Mission at our embassy in Belgium before being posted as ambassador to Lebanon. During various assignments I maintained warm relations with Indonesian colleagues.

On behalf of PUM Senior Experts, where I serve as the sector coordinator for public services, I advised the Governor of Central Java in April 2016 concerning Semarang Old Town and its possibilities for inscription in UNESCO’s World Heritage List. In addition, I am involved in the Unesco Centrum Nederland and the Sen Foundation for Research and Education in International Cooperation, in both organizations as Chairman of the Board. I am also a member of the Committee of Recommendation of the Dutch ngo Independent International Cadastre.

I am honoured and thrilled to be a member of the Board of Trustees of INS, because this gives me the opportunity to stay connected to Indonesia and its people and to contribute to further strengthening of the warm relations between our countries and their citizens.” 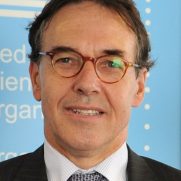