Ferdian Suprata was appointed to the INS Indonesia Board in 2017. Through his studies, working experiences in the Netherlands and family ties, he has a connection between Indonesia and the Netherlands. He was born in Jakarta, Indonesia and spent his childhood there. He has been studying in the Netherlands since 2001, where he has spent his time for 15 (fifteen) years living, working, and assimilating into Dutch Society. While in the Netherlands, he was involved in Indonesian Young Communities including Perhimpunan Pelajar Indonesia (PPI) and Indonesian Professional in order to share and preserve Indonesian Culture. Professionally (2006 – 2010), Ferdian worked as a Spacemanagement Consultant at Johnson Controls IFM, Business Intelligence Developer at Atos Origin, and Businesss Development Manager at Gibeon Solutions to provide Information Technology (IT) Solutions to multinational companies based in the Netherlands. He appreciated the dynamic and international working environment, which allowed him to foster innovation and sustainability though digitalization and advanced Information Technology.

In 2015 he has decided to return to Indonesia. In order to help bridge the educational gap between Indonesia and the Netherlands, he joined with Nuffic Neso Indonesia and was appointed Program Coordinator Living Lab RI – NL, where government, universities, and businesses collaborated on specific sectors (logistics, and water). Ferdian also served as a trustee for the Indonesian Netherlands Youth Society (INYS), which aims to bring young Indonesians and Dutch people together. Furthermore, he was involved with Frans Seda Foundation to discuss between Indonesian and Dutch Leaders about any opportunities that could benefit both countries.

Ferdian was also the founder and CEO of Banting Start-up, which provides location based mobile advertisement application in the Jakarta Area. His entrepreneurial journey was then accelerated by his employment at PT Sampoerna Wirausaha, where he was involved in Financial Technology Startup (Mekar). He is currently a lecturer at Atma Jaya Catholic University of Indonesia and the Head of Laboratory of Industrial System Innovation, where he can contribute to more sustainable society through technology innovation and youth education.
In 2006, he received his bachelor’s degree (B.Eng) from InHolland University of Applied Sciences in 2006 and in 2012 he received his master’s degree (M.Sc) from Delft University of Technology. His primary area of interest are sustainabel development, information technology, technological Innovation, product development, data science, and entrepreneurship. With his previous background and vision, Ferdian hopes to further develop the connection between Indonesia and the Netherlands. 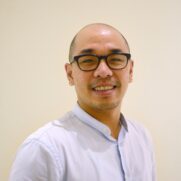