Indonesia and the Netherlands share similar visions on addressing challenges arising from water issues. This notion was highlighted during the courtesy visit rendered by Ambassador Wesaka Puja of Indonesia to the Dutch Minister for Infrastructure and Environment, Mrs. Melanie Schultz on 12 April 2016.

With more than 17 thousand islands in Indonesia vast archipelago, Ambassador Puja stressed out that the current administration headed by President Joko ‘Jokowi’ Widodo intends to project a vision that sea and water as a medium to unite the nations rather than viewing sea and water as a cause of separation. The Netherlands likewise, pointed out by Minister Schultz, has been sparing centuries in making sea and water as friend and source of welfare for the people. The Minister further referred to the new province of Flevoland and Maasvlakte II that developed from reclamation. The two agreed that Indonesia and the Netherlands boost cooperation in water sector and by doing so elevate the bilateral relation between the two countries in higher extent.

Apart from water issues, Ambassador Puja and Minister Melanie aided by Mr. Koos Wieriks and Mr. Bart van Bolhuis from the Netherlands and Mr. I Made Suartika and Mr. Iwan Nur Hidayat from Indonesia, also discussed on the program of the upcoming working visit of Indonesian President Widodo to the Netherlands, updated status on the implementation of NCICD (National Capital Integrated Coastal Development) of Giant Sea Wall in Jakarta Bay, upcoming meeting on Delta Coalition in the Netherlands and issues on the preparation for the visit of Dutch PM Rutte to Indonesia in November 2016. 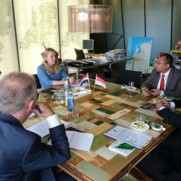